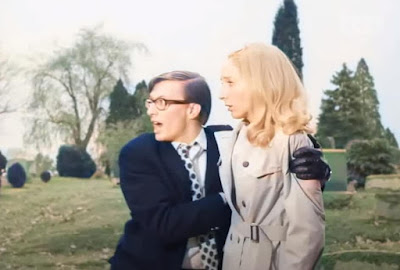 Nowadays there aren't many horror movies production houses like in the past there used to be. This is a pity for all those who are fans of horror cinema.

Still, some companies are still struggling at becoming horror producers at the level of the powerhouses of the past, like Universal, Amicus or American International Pictures. Some have taken up the torch, but sadly the landscape is not what it was in the 20th century.

Most horror fans have gone through a phase of obsession with series of horror movies that were all produced by a single horror specialty production house, for instance the Universal Monsters Cycle. It's a constant, that when a few horror films of a determined production company click with you, you want to watch everything else they have delivered.

Call me old-fashioned, but besides the Universal classic horror movies, the ones that most clicked with me where the ones belonging to the so-called Corman's Edgard Allan Poe Cycle, featuring Vincent Price.

After I went through all of them (and each other AIP horror flick I could get my hands on), I watched practically all the horror movies by Hammer Films and the ones by Amicus.

It's to this day that I wish my seasons watching those movies would have lasted a lot longer than what they did.

Grok the Horror Movies Production Houses
of the Past and Present!

If you are like me, you long for not just the aesthetic experience that companies bent on delivering a consistent stream of horror flicks took care of perfecting, but also for the immersive experience that such an approach to delivering and watching horror movies generates.

Nowadays we have succesful horror movie franchises that dish out sequel after sequel, and some intertextual experiments, but it's not the same. The truth is that times moves on ruthlessly, and crying for the dissapeareance of the horror movies production houses of the past accomplishes nothing.

We should not forget the great ones of the past, but also be in the know about each and everyone attempting to recreate those serial experiences in the present.

You will be able to grok each horror movie production company of the past and present in this area of the website.

In each horror movies production house page of this area, you will find general information about the companies, a list of the movies they have released, and other data that is important both for those who watch these movies, and those who work (and want to work) in them.

Do you Own a Horror Movies Production Company?

You don't need to be a The Asylum employee to request coverage of your production company on this website. Especially if your company is an independent outfit, and you would like to have your horror production house featured in this area of the site, we invite you to let us know. We will create a page with all the information on your company we can gather plus anything you would provide us.

Go to the Search Page